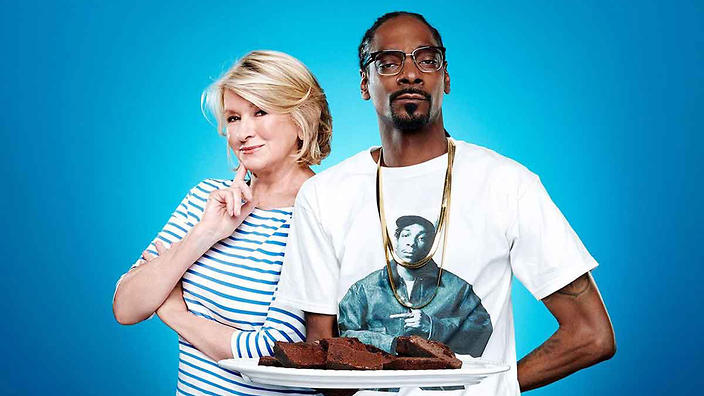 I have no “ill will” toward kitschy craft diva Martha Stewart and this CBS sequel to MARTHA, INC.: THE STORY OF MARTHA STEWART (2003) didn’t change my opinion. I’ve always found her persona kind of charming. I do like women who can cook and fashion a seasonal bong out of a gourd. With her intellect and business savvy she must be a real control freak, that’s pretty sexy.

Yeah, my early 20s pool boy stamina on a hot summer day, catching Martha’s gaze as my muscles flex out a rhythm to remove the black algae from her deep end. She motions me over to the teak chaise lounge cushion.

“Have a sip of my Pineapple-Raspberry Bellini”.

One gulp leads to another – the thirst is never quenched. The ribald passion of our sweaty affair cooled only by the evening air and the guests who begin to arrive. After several pitchers of Vermouth-Grapefruit Sangria and ignored for too long, I grab the microphone from a member of that smooth jazz quartet. With an internal V8 that’s running hot, I must paint an exclamation point to the lust within.

I smash her beloved bric-à-brac and themed party decor.

As I hurdle endless topiaries into the darkness, I tell myself she can always make more. The sirens screech and the lights flash! Dogs call out for blood! I’m sorry Martha. I will return my love! One sultry evening with a tray of Tuna Nicoise Crostini hors d’oeuvres. All will be forgiven until our final act of sin.

So, Cybill Shepherd reprises her role as the shrewd business woman who’s cover up of an insider trading crime lands her a 5-month stint in a minimum security prison. Written from the facts with no artistic liberties or dirt exposed, this plays like a miscast episode of Dragnet.

Only a third of the film takes place behind bars and these scenes are as light as Martha’s Lemon-Chamomile Cream Pie. We are treated to such thrilling scenes as Martha busted with spices and Martha joining an inmate Christmas decoration contest.

Minimal effort is put into what makes Martha tick and there is no clear character arch to make the production rise above typical television biopic fare. Do yourself a favor and watch the real Martha Stewart make Bacon Cheeseburgers instead.